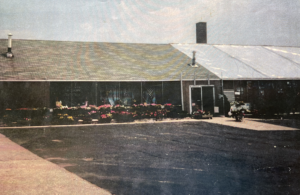 The landscape at 352 Pedretti Avenue, Delhi hills looked quite different in the early 1900’s when George Robben Sr. and his brother Ben worked the family farm operation growing lettuce, tomatoes, and vegetables that they transported and sold at farmers markets throughout the city. Ben chose to leave the farm operation in 1929 for a business career and George Robben Sr. took over the farm.

In 1931, after marrying Agnes Bross and acquiring 20 acres of land from his father, George Robben Sr. constructed the first greenhouse and made the transition from growing produce to growing various types of cut flowers and plants. With the help of George’s wife Agnes and family, George Robben Florist was established.

In 1947, a hailstorm came through Delhi breaking 10,000 panes of glass in the greenhouse. With the help of friends and family the greenhouse was repaired and back in operation.

In 1967, George Sr. and Agnes sold the florist to their sons George Jr. and Ray. George and Ray changed the name to Robben Florist and Greenhouses and expanded the business adding additional greenhouses and a larger showroom.

On December 26, 1988, the showroom and greenhouses were destroyed by an electrical fire. With the help of family, friends, and the Delhi Township community Robben Florist and Greenhouses was able to re-build.

During the 1990’s, in October of every year, the Robben Family and Staff hosted Pumpkinfest for the community. Ray passed away in November 1996 and George Jr. became the sole owner.

In 2000, George decided to semi-retire and sold the business to his son Ron (third generation) and his wife Melissa. The name changed to Robben Florist & Garden Center lnc. and continues to grow with the changing of the glass greenhouses to plastic and addition of more greenhouses to expand the wholesale operation.

Today the business operates as a florist, garden center, and wholesale establishment. The florist still designs beautiful arrangements for all occasions including weddings and special events. The retail showroom offers an extensive giftware selection, and the garden center offers a full line of plants, trees, shrubs, and yard decorations. In the greenhouses, they grow a large variety of annuals, perennials, poinsettias, and bulbs.

Known as one of Delhi’s longest floral operating businesses, Ron and Melissa contribute its success to the staff, family, friends and loyal customers who supported them over the years. Robben Florist & Garden Center has planned a cookout on October 2nd to celebrate their’90th year in business, celebrate milestones, and thank their staff and customers for their loyalty.